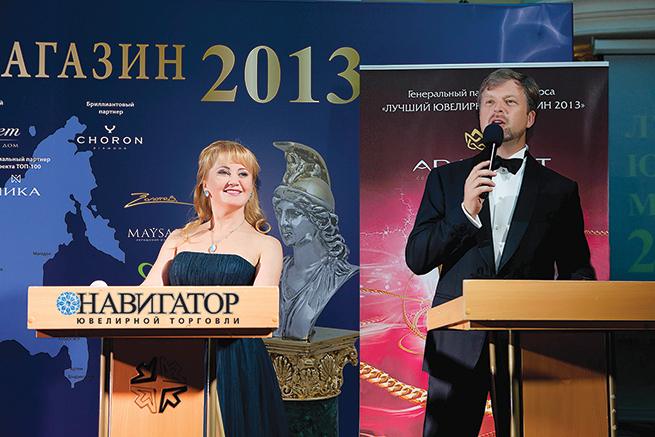 On the 28th of June 2013 in the luxurious hall of the famous Moscow Korston Hotel the regular Awarding Ceremony of the winners of “The Best Jewellery Store of the Year” International Contest, held by the “Navigator for Jewellery Trade” magazine for the twelfth time, took place. On this day, the central event of the jewellery industry brought together an unprecedented number of participants and guests, including those from other countries. The increased foreign jewellers’ interest in the Contest has once again confirmed its importance at both national and global levels. Read about this all-liked and extremely popular Contest in our report.

This year Moscow Korston Hotel, which is justly considered one of the best Moscow hotels, hospitably threw its doors open to the participants of the Ceremony. Continuous camera flashes, trail of exotic scent and almost inaudible rustle of evening dresses, snow-white smiles and shine, glitter, shimmer and unearthly light of jewellery of all shapes and shades from Russian and foreign manufacturers. That was the atmosphere when the guests were coming to “The Best Jewellery Store 2013” Ceremony. By four o’clock, the hall was filled with beautiful women and respectable men. Champagne, delicious cocktails and refreshing drinks were just that was needed on the hot summer day, even in the cool of the hotel.

As usual, the guests of the Ceremony exchanged smiles, handshakes and kisses, and then, with a glass of something tasty and cool, formed small groups, having unhurried and pleasant conversations, in anticipation of the start of the Ceremony. You could hear silver bells of beautiful ladies’ laughter, classical music, unfamiliar words in foreign languages; among the guests were the representatives of the United Arab Emirates and India, who communicated with the participants of the Contest. This year is not the first when the representatives of foreign jewellery manufacturing companies take interest in the Russian jewellery market, considering it a promising direction of the development. Some guests came to the Ceremony as the best players were really there, and in an informal atmosphere it would be possible to make acquaintance with them and agree on future meetings and fruitful cooperation.

The Ceremony began. And, as if obeying some mysterious force of gravity, the guests moved smoothly into a luxurious hall, which brought to mind an old Parisian street. There, among the medieval houses and in the soft light of lanterns, they saw laid tables with white starched linen tablecloths, silverware and an endless variety of dishes from the Korston Hotel’s chefs. The official part of the Ceremony began.

The emcees, charming Oxana Senatorova, the publisher of the “Navigator for Jewellery Trade” magazine and the permanent hostess of the party, and an elegant showman Valdis Pelsh stepped up on the stage. “The Best Jewellery Store of the Year” Award is traditionally presented to the best of the best representatives of the domestic jewellery market for the highest achievements in jewellery sales. This Award is the recognition of the store on the highest level. It is the appreciation of the leading experts of the Russian jewellery market. I want to emphasize that our nominees are selected according to very strict criteria. And this gives them the right to be proudly called the best jewellery stores of the country,” said Oksana Senatorova, drawing attention to the importance of the event for the economic development of the country in general and industry in particular..

First, the participants of the “Top-100.100 Best Jewellery Brands of Russia” project were invited to the stage. For their merits they were awarded Badges of Honor “TOP-100”. The participants of the project are the stores with spotless reputation. Partners, manufacturers choose them, and, most importantly, buyers trust them. They are the leaders of jewellery retail trade known for high quality of the product and service. This year the partner of the“Top-100.100 Best Jewellery Brands of Russia” project was the watch plant “NIKA”, the leading manufacturer of jewellery watches. The variety of the product line, topical design, high quality and reliability of the product are the business card of “NIKA”. The company creates watches for those who appreciate its unique style, design and elegance.

Other lucky owners of the jewellery stores, chosen by the attentive and competent jury, came to the stage. After the last of them had returned to his table, everybody in the hall joined the toast in the honor of the winners. The first part of the Ceremony was over. And during the traditional musical pause the guests could not only drink a toast to the lucky owners of “TOP-100” Badges of Honor but also enjoy delicious dishes and excellent performance of the artists.

For the list of the jewellery stores, awarded “TOP-100.100 Best Jewellery Brands of Russia” Badges of Honor, look HERE

At the beginning of the next part the winners in the categories “Effective integration of production and retail trade”, “Promotion of products of Russian manufacturers”, “The best organization of service”, “Promotion of premium brands”, “The best watch shop”, “The best work with suppliers”, “The best trade mark” and others were invited to the stage. The shop owners from Magadan, Tuapse, Stavropol, Siberia and the Urals were happy to get well-deserved awards. Many of them thanked the organizers of the competition and Oxana Senatorova personally.

Among the guests of the ceremony were the representatives of state and public organizations with traditional welcome letters. “I am deeply convinced that the main objective of the International Contest is to support and encourage the professionals in the organization of jewellery sales and, most importantly, to support the creative potential of business leaders”, Vladimir Markin, Head of the Assay Chamber of Russia noted in his letter. “For popularization of their brands the participation in the Ceremony is important both for the new and organized many years ago jewellery retail companies.”

Traditionally, this award is presented to those, who have managed to create a unique interior of the jewellery store, who are not afraid to embody their dreams and ideas in the design of the salon, and whose shops are themselves a real treasure. And the buyer will certainly notice: they have done their best for the customer to feel nice and comfortable.

This year, the competent jury noted 15 jewellery stores and salons, from 50 to 500 and more square meters in area, from Russia and Kazakhstan. Flagship stores, boutiques and salons, shops and jewellery centers brought to their cities Commemorative Diplomas and Pallas Athena Silver Statuettes – a symbol of perfect work and serious contribution to the jewellery industry.

The party meanwhile was approaching its culmination point – presentation of Grand Prix. “Just in a few minutes, the absolute winner will come to this stage. He will get Grand Prix and will become the lucky hero of the party. Oxana, there’s no reason to wait!” announced Valdis Pelsh and the audience responded with applause.

“Every year, as soon as the Ceremony reaches its culmination, I suddenly realize that I am getting excited though it is not for the first time for me; I have already announced 11 Grand Prix winners. I am excited because it is a great responsibility and an even greater honor to name the absolute leader in this continuous competition for the status of the best of the best”, said Oxana Senatorova. And together with Valdis Pelsh she announced, “This year, the jewellery salon “Estet” (Aesthete) from Tomsk has become the best of the best, the absolute leader among the jewellery retail enterprises”.

All the world's best design trends are embodied in the luxurious aristocratic interiors of the jewellery salon “Estet”. The perfect interior design is worthy of the wonderful range of goods. The jewellery salon “Estet” has deserved the high award of the title of the best jewellery store of 2013! Charming and elegant, Vera Ziborova, the owner of the “Estet” jewellery salon was invited to the stage. The representative of the General partner of the Ceremony, the President of “Adamant” group of companies Grach Sarkisovich Avakyan, presented the award to the winner. Greetings and smiles, tears of joy and the clink of glasses to the absolute winner! The official part of the Ceremony was over and the emcees gave place to the artists.