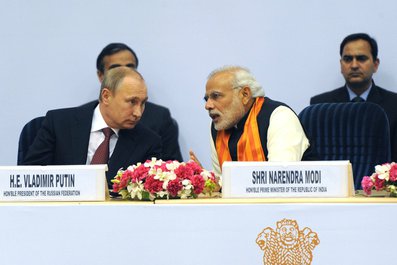 The two-day World Diamond Conference in India started on Thursday morning with speakers providing a general view of the state of the diamond markets and talking about the need for generic marketing campaign for diamonds and diamond jewelry.

Putin spoke about the importance of diamonds to the economies of both countries and that talks had taken place during his visit to the country as to how they could further expand their trading links.

Meanwhile, Modi appealed to Russia to sell rough directly to Indian firms rather than via trading centers such as Antwerp and Dubai to the obvious delight of Indian diamantaires.

Although most of Russia’s rough diamonds are polished in India, fewer than 20 percent are sold there directly, Modi told his guest.

“I would like for Alrosa to have direct long-term contracts with more Indian companies," Modi said. "I am pleased to know that they are moving in that direction.”

He said that he had also asked Putin to agree to lift duties on Russian jewelry manufacturers who send rough stones to India for polishing and then re-import them.

Modi also said that India will set up a special zone for companies where they can import rough gems on a consignment basis and re-export unsold goods.

Alrosa said it has signed 12 long-term agreements with Indian companies, including polished diamond producers and jewelers. Direct supplies to long-term clients from India will be increased, as compared to 2014.

Gem & Jewellery Export Promotion Council (GJEPC) Chairman Vipul Shah also spoke of the importance of Russian diamonds to the country's diamond industry that employs one million people and accounts for around $20 billion in exports annually.

Meanwhile, World Federation of Diamond Bourses (WFDB) President Ernie Blom said that the responsibility for developing a marketing plan and strategy for diamond jewelry has become the responsibility of the industry as it can no longer rely on mining firms to do so.

"The WFDB representing 30 bourses across the globe, has for the past 67 years been at the forefront of developments in the diamond industry. The WFDB has recognized the importance of marketing and the elevation of the status of diamond jewelry in the eyes of the consumer when competing for the luxury dollar spend. Based on this assessment, the WFDB created the World Diamond Mark. The WDM has been very active in building awareness, raising funds and launching this very extensive program to assist with the marketing of diamond jewelry."

The second day of the conference will put an emphasis on financing for the diamond industry and possible solutions.