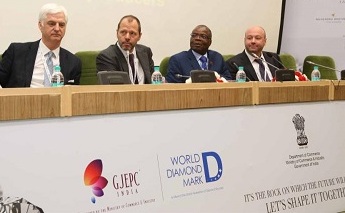 Alex Popov, chairman of the World Diamond Mark Foundation (WDMF), said that the conference exceeded expectations. "The topic of generic marketing was the golden thread that ran through all the discussions and bound the various presentations and speeches together. This was also the first time that retail jewellers and brands featured prominently, presenting diamond industry members with valuable insights.

"It was a very intense two-day meeting that brought the need for generic marketing and promotion of diamonds to the full attention of all participants," Popov said. "Of course, WDMF and the World Federation of Diamond Bourses (WFDB) are very grateful to India's Gem & Jewellery Export Promotion Council for taking the lead in organizing this exclusive event that was headlined by the conference inauguration in the presence of two of the world's most powerful leaders, the president of Russia and Prime Minister of India," he added.

Ernest Blom, President of the WFDB, noted that during the discussions, a suggestion made by one of the producers, to create a diamond industry think-tank to discuss the ways to move forward the issue of generic diamond promotion, was warmly adopted by the WDMF and the WFDB.

"This initiative will help us propel the development of the WDMF and contribute toward the inclusion of all stakeholders in the World Diamond Mark growth and acceptance throughout the industry and in the downstream market," he commented.

Popov announced that the first think-tank meeting is scheduled to be held in March, and that the next World Diamond Conference is slated for November 2015.

"We would hope to emulate the excitement and quality of the inaugural event, and to make this an annual tradition," he concluded.